You are here: Home / KB: Knowledge Base / Solving the problems of Brexit with 500-year-old wisdom
You are here:
< Back

Meet the academics hoping to heal the divisions in modern society using a 16th-Century work of speculative fiction.

There once was an island that was connected to a larger continent by a small but significant link. But then one day the citizens of this island decided to irrevocably separate themselves from the mainland, in order to pursue a dramatic and some might say unrealistic vision of a better society. 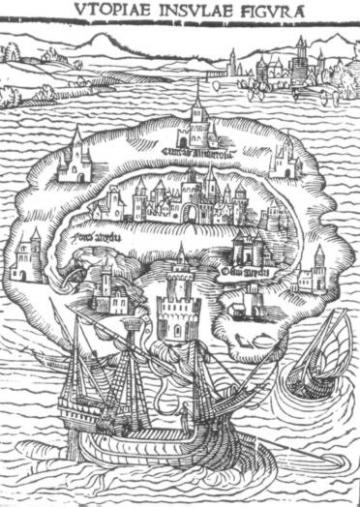 According to Wes Williams, Professor of French Literature and Fellow of St Edmund Hall, and Richard Scholar, Professor of French and Comparative Literature and Tutor at Oriel, More’s work still has some important lessons for modern society. They are collaborating on innovative theatrical production, Storming Utopia, a ‘mashup’ of More’s Utopia and Shakespeare’s Tempest.

An ‘experiment in practical utopianism’, the project aims to break down boundaries of age, class, race and gender in Oxford, bringing together a socially and ethnically diverse cast ranging in age from 7 to 67 to ask what would make a better society.

Storming Utopia is also looking to build bridges between England and Europe.  Jointly funded by a Knowledge Exchange Fellowship from TORCH (The Oxford Research Centre in the Humanities) and money set aside to fund collaboration between TORCH and the Cini Foundation in Venice, the production also performed in Italian at the foundation’s headquarters on the island of San Giorgio Maggiore.

Throughout, the play asks the question ‘If there was one thing you could change about the place you could live, what would it be?’, prompting responses from the cast and audience.  These have varied from making university libraries accessible to the general public to scrapping private education to radically reconstituting the nuclear family. One of the more creative ideas suggested flooding Oxford and turning the streets into Venice-like canals, to solve the city’s notorious parking and traffic problems.

But as well as imaginative dreaming, Storming Utopia has also tackled bitter post-Brexit political divisions. This was particularly important to younger members of the cast, to express the anger and powerlessness they felt post-referendum.

‘Everybody in the show who was under 18 had a really strong sense that their future had been taken away from them. And that they had no say in it. One of the young people in the show said “What’s been really great about this show is it’s given us a voice that we don’t otherwise have,”’ says Professor Williams.

However, as theatre, Storming Utopia ensured that the representation of Brexit— after all a kind of Utopian vision— was not only one-sided. Throughout the play several characters— including Boris Johnson— argue the case in favour. According to Professor Williams, the intention was to build bridges, not create greater divisions, and so it was important to explore a diversity of experiences and opinions.

‘Brexit is much a symptom as a cause, and Brexit is a symptom of divisions, boundaries, walls within British society.’

But at least within the small group of 21 individuals in the company, the project seems to be overcoming some of these deep divisions. Many of the actors, who have lived side by side in Oxford in years without getting to know one another, have formed close personal friendships across boundaries of age, social class, ethnicity and university or non-university affiliation.

Most rewarding was the chance to confront the deep generational divide becoming ever more present in politics, bringing together people decades apart in age and giving them a chance to learn from each other’s different experiences.

‘You might think the main thing would be ethnic diversity, or perhaps religion, amongst all the various things that we think of as somehow determining difference. But actually it really was age that people talked about when we asked them what they learnt from this project. We constitute ourselves as little islands of age, and as we grow older, we take our little island of oldness with us.’ says Professor Williams

Professor Williams believes this shows that there is the potential to overcome even the most intractable of differences.

‘In terms of what I’d like people to take away from the play, I think hope. Hope in the possibility of community, of people working together to make stuff happen. A bit of rage at the current state of affairs. But mostly utopian hope.’

‘I think that Storming Utopia has been a genuinely Utopian project, the bringing together and sharing in common of an experience involving people who wouldn’t otherwise have had that chance.  I count myself very lucky to have been a part of it.’